By accepting you will be accessing a service provided by a third-party external to https://cogosense.com/distracted-driving/

The numbers don't lie.  Employees who use hand held mobile devices while driving pose significant financial liability to their employers.

According to FMCSA data compiled and presented by Peoplenet there has been a steady and rapid increase in fines issued to truck drivers and carriers for various violations of the new regulations that prohibit hand held use of mobile devices while driving commercial vehicles.

The data is summarized below and reveals the following monthly fines have been issued thus far in 2013: 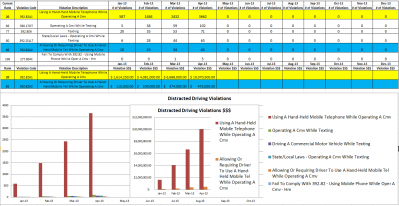 The message is clear.  Drivers and carriers who ignore the rules can expect to pay a significant fine and suffer the consequences of having higher CSA basic scores.

Alternatively, drivers and carriers who are proactive can leverage innovative technology to promote safe and legal use of mobile devices while employees are driving on the job.

Earlier this month, our partner, the National Safety Council (NSC), issued a press release announcing a white paper and infographic which they have published that describes the under-reporting of distracted driving accidents due to mobile device use.

This is a critical issue because the official state records drive awareness, legislation, funding and solutions.

For our part, Aegis is advancing the knowledge of causality in motor vehicle accidents by working with corporations, government departments, insurance providers and law enforcement agencies to collect and analyze real empirical data. Such data will better inform our understanding of risk and prevention.

Interested organizations are invited to contact us to participate in data collection and analysis studies based upon Aegis' industry-leading software solutions for the prevention of distracted driving.

Let's all work together to make our roadways safer.

In the few seconds it takes to look at a text message or answer a phone call while driving -- your business could suffer a catastrophic loss.

Thankfully, FleetSafer from Aegis Mobility is helping companies like IH Services ensure safe and legal use of mobile devices while employees are driving on the job.

The simple to use solution works on nearly any smart phone or tablet computer and gives employers the flexibility to define custom driver safety policies and the comfort of knowing that employees are in compliance.  Automatically-activated by vehicle speed or other methods, FleetSafer places the employee’s phone into safe mode. The result is reduced crashes, fewer injuries, and less liability.

Watch this video to see for yourself how FleetSafer works.

Just How Important is That Text Message?

The following is a guest post by: Dr Gerry Purdy, Ph.D

Alicia and I were watching “American Idol” last week - just like you and millions of other people. But, all of a sudden, something ‘strange’ happened in the background while Ryan Seacrest was talking.  I didn’t notice it at first it and then I realized what happened.

I thought, “Mariah Carey is texting during a live TV show!” So, I backed up the show a bit and looked at it again. This time I paid close attention to Mariah sitting at the judges table in the background.  “My god, she is sitting there doing text messaging in front of 20 million people.  She clearly wasn’t supposed to be doing that.”

Well, that got me thinking. “Why do people take a risk of texting when clearly they shouldn’t be reading and composing text messages?” We all know that there’s a strong emotional need to pick up your smartphone when you’re not supposed to and either compose a new text, or – more likely – respond to a text you just received.

With the advent of many state laws outlawing texting while driving, it isn’t a matter of just altering your behavior. Rather, it’s a need to resolve the emotional drive to read and then do a quick reply. It’s not just a few people who feel this way. Rather, we all seem driven in a very similar way about this at times.

I think part of the inherent drive comes from the nature of texting being an immediate message. You know someone has created a message just for you, and you feel a sense of personal pride and affirmation about being ‘singled out’ by someone.  There’s also a cultural issue that you see so many other people instantly replying when they receive a text message that it give each of us the affirmation that it’s OK to do it.    Email doesn’t elicit the same emotional reaction.  You may get a beep or other audio notification that you’re received an email, but because you know it’s an email, you know that the person who sent it isn’t expecting you to reply instantly.  But, with a text message, you not only think about your desire to respond quickly, but you know the person who sent you a text message is likely sitting there staring at their smartphone display waiting – yes, waiting – on you to reply in the next few seconds.

It’s like there is an underlying rule of texting: “Hey, if you get a text, it’s not some low priority, ‘answer whenever you can’ kind of thing over the next few hours.  The rule is that you must pick up your smartphone, read the message and reply immediately because it has to be a matter of life and death. You have to compose a reply immediately so the person’s dire request is answered within the expected next few seconds.”  Of course, you can see where this is headed. If two people both feel this way, then the situation is ripe for a rapid exchange of 20-30 text messages until someone gets interrupted or one of the parties feels it finally has gone too far.

It may be that when we get into a car, it’s best to put the smartphone in silent mode or, even better, turn it off.  But, turning it off may not be wise either.  What if you receive a call from someone that is very important – even life threatening?  You don’t want to miss that just because you’re trying to avoid texting.  So, turning the phone off may not be the best thing to do. There are a number of apps out there (like ZoomSafer by Aegis Mobility that won the 2013 Mobility Award) that can shut down texting when the app senses that you’re moving above a threshold speed such as 10 mph. Such software is getting much better than when it was just being introduced a few years ago.  The app can now detect if you’re on a train or public transportation vehicle and determine if you’re driving or a passenger.

Back to Mariah Carey texting during a live episode of “American Idol.” First, no one in the audience is allowed to bring their phone into the studio.  The security for these shows is very tight.  Alicia and I were fortunate to attend an episode of “Dancing with the Stars” about 18 months ago, and we had to go through metal detectors, check in our cameras and phones and be checked again.

I presume if you’re Mariah Carey (or any high profile judge), you get exemption rights to check your phone. That’s a policy that the show’s producers might want to review.  But, I can see that once they allowed her to bring it into the studio (even in silent mode), it’s easy for her to see a text message appear on the display and then have a strong emotional need to reply since the scene was all about Ryan Seacrest talking, not the judges. It may have been a steamy text from husband Nick Cannon.    You can see why she may have been so driven to reply.  Personally, I don’t blame Mariah Carey for texting when clearly she shouldn’t have been.  The show producers and operations managers allowed her to take her smartphone into the studio. That ‘teed up’ the situation where she really couldn’t help herself. Someone was texting her, and she felt just had to reply.  The producers need to help her by asking her for her phone while she’s on stage and then putting it in a case so the staff can’t read her text messages.

The next time you find yourself in a situation where you shouldn’t be texting (like driving or being on national TV), either avoid the temptation (hard, I know) or send a really short message like ‘driving’ or ‘on TV’ and then put it somewhere you can’t easily pick it up until your situation has changed.    Oh, and yes, we are hooked on American Idol. I believe that Angi Miller is going to win.  And not only win, but I think she’s going to become as popular as Carey Underwood. You heard it here so don’t be surprised if Angi Miller wins “American Idol,” has lots of hit songs and wins a lot of Grammy’s.

About the Author:  Gerry Purdy, Ph.D. is Principal Analyst, Mobile & Wireless, MobileTrax LLC. As a nationally recognized industry authority, he focuses on monitoring and analyzing emerging trends, technologies and market behavior in the mobile computing and wireless data communications industry in North America.  Dr. Purdy currently is a columnist for eWeek and CIT Insight and is an affiliated analyst at GigaOM.

It's been a long time in coming -- but last week, Sprint bid farewell to their outdated Nextel iDEN network which will shut down on June 30th.  You heard it right.  The shutdown is less than 60 days away.

And despite two years of advanced warning, more than one million loyal Nextel business users are still clinging to the old push-to-talk walkie talkie service, like swimmers in the middle of the ocean clinging to a life boat that is about to sink.

If your business is still clinging to the old Nextel network -- it is important not to panic.  There's still time to make the switch and grab hold of a new future.  One that is complete with walkie-talkie features, faster networks and improved coverage.

Furthermore, if your employees are highly mobile, work with their hands, and drive company vehicles in industries such as construction, manufacturing and building services -- then the switch comes with a huge benefit in the form of a mobile application called FleetSafer.

FleetSafer is software that reduces risk and liability for commercial fleet operators by automatically promoting safe and legal use of mobile devices while employees are driving on the job.  FleetSafer is available on Kyocera DuraCore, DuraXT, DuraMax and DuraPlus phones with Sprint® Direct Connect®.

So when it comes to preventing work place distracted driving -- "leaving the old" and "embracing the new" never felt so good.